Under Armour Chairman Kevin Plank and his team reached out to Maroon PR needing strategic assistance with a special announcement. That announcement, that the historic Sagamore Farm would be transitioning from training and breeding Thoroughbred horses to a working farm where corn and rye would be grown for Plank’s award-winning Sagamore Rye.  The farm will be transitioning by the end of 2020 and Sagamore Racing’s final race was to be at the prestigious Breeder’s Cup Classic with prized horse Global Campaign. It was an announcement worth of media and amplification in an effort to confirm Plank’s commitment to the historic farm in Maryland.

Plank purchased Sagamore Farm in 2007.  In 2010, almost ten years to the day, Sagamore Racing burst on the scene when 46-1 underdog Shared Account stunned the racing world with a win at the Breeder’s Cup.  Now after a great run of wins and experiences, the farm is transitioning and Shared Account’s victory is being bookended with highly regarded Global Campaign’s run at the Breeder’s Cup.  Maroon PR understood that this announcement would be significant both locally and in the horse racing world so it would involve a multi-pronged approach.

Maroon PR first invited two local journalists, one in print/online and the other in radio, to speak with Plank in advance of the announcement going to the masses with the understanding that their stories would be coordinated to go live when the press release was shared widely. In addition, there was a need for a well-produced asset that could be shared on social media.  Maroon PR shot, edited and produced a video that included Kevin Plank’s voice and vision as well as stunning footage of the beautiful property and racing memories. The video would not only be shared by Plank but by a select group of his other companies and brands including Weller Development that is developing Port Covington in South Baltimore where Plank is invested, as well as Sagamore Racing and Sagamore Spirit.

Finally, with the Breeder’s Cup coming days after this announcement Maroon PR retained a videographer to attend the race with Plank in Keeneland, KY, created a second social media video focused on racing that was shared by Plank the day of the race, and was ready with an announcement should Global Campaign fare well in the race.

Upon announcement, the story of the farm’s transition ran across all local media outlets and was widely covered by the horse racing industry. In addition, the video received an overwhelmingly positive response on Plank’s Instagram. 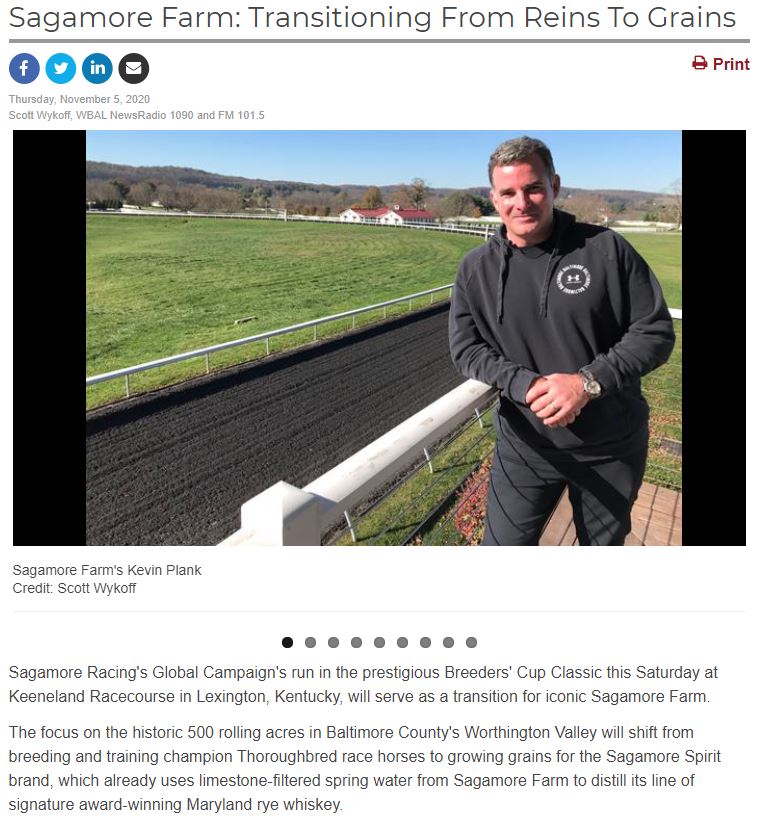 More from WBAL Radio
Back to Projects