The long-standing, but relatively unknown history between Pitch and Putt Golf Club of Baltimore and Carroll Park Golf Course and their roles in the Baltimore civil rights movement was recently brought to life via a monument dedication event. Pitch and Putt, the second oldest African-American women’s golf organization in the country, independently raised funds to commission, design, and install a free-standing outdoor brick monument commemorating the history of Black golfers at Carroll Park on the grounds of Carroll Park Golf Course.

The unveiling event coincided with the start of Black History Month and honored the history between Club and Course, highlighting the perseverance of African American golfers, giving voice to their contributions and celebrating their legacy as catalysts for attaining desegregation at Baltimore golf courses and other public recreational spaces in the 1950s.

Prior to gaining city-wide status, the nine-hole golf course was the only place African Americans were permitted to play in the 1940s, due to segregation policies of the time. Around the same time, Pitch and Putt Golf Club of Baltimore, an African American women’s golf group of 33 members, was established at Carroll Park in 1938.

After years of playing under restrictive, segregated policies, a group of African American golfers challenged the city to access all golf courses through several legal actions. Full access was achieved after continual persistence in the 1950s. The golfers were the catalyst for opening dialogue with elected officials and local clergy, resulting in the City of Baltimore granting open accommodations to all public recreation facilities.

Maroon PR worked together with Pitch and Putt member and monument committee leader, Brenda Goburn Smith, and Tom Pierce, Baltimore’s Classic Five Executive Director, on this historic moment, in-part by distributing a detailed release, outlining the historical background between Club and Course, the genesis of how the project started and the significance of the monument.

“This commemorative project gives voice to the significant contributions made by African American golfers to desegregate Baltimore City’s golf courses, and the positive value a golf course can bring to the environment, neighborhoods, economy and citizens of the city,” said Tom Pierce, Executive Director, Baltimore Municipal Golf Corporation.

Maroon PR’s design team also worked to bring to life an infographic, designed by the Pitch and Putt Golf Club, on the walls of Carroll Park, coordinating with a local sign and graphics installer to create and install a 9’ foot 9” tall by 6’ foot wide, full-color decal the club hopes will serve as an educational tool about African American golfers as advocates for social justice in Baltimore for generations to come.

Our team helped secure coverage for the event, garnering a large response from local media members, as The Baltimore Sun ran their story both digitally and on the front page of their printed paper. All four local Baltimore television stations covered the event and featured segments on their newscasts.

The Baltimore Sun published the article online, along with a front-page feature in the February 1st edition. 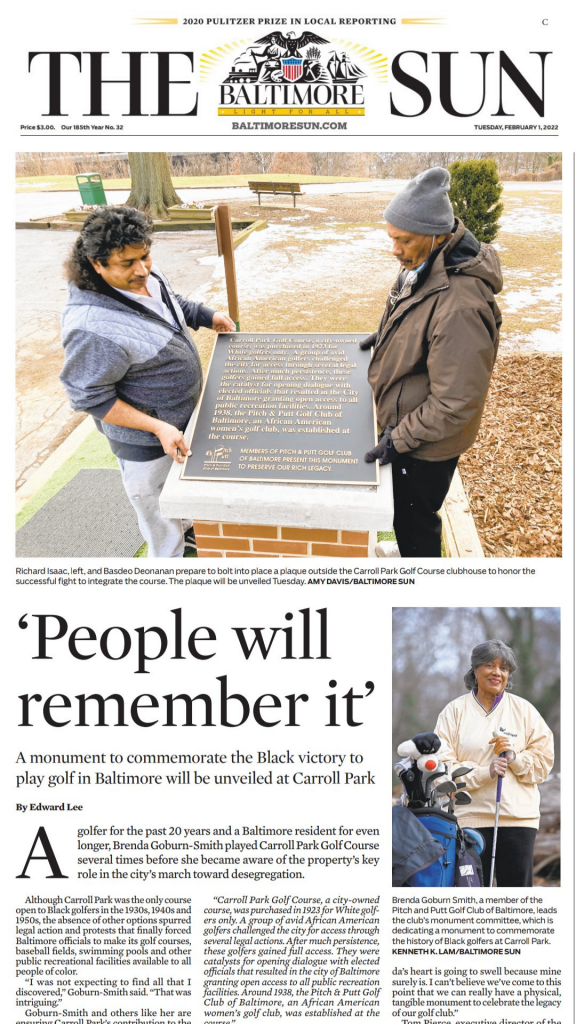 WBAL TV’s Lisa Robinson, on the efforts put forth by Pitch and Putt to commemorate African Americans role in desegregating Baltimore golf courses

April will mark 17 years since Maroon PR opened its doors. For more than 16 years, Maroon PR has focused on being a true partner to our clients. A partner that brings value and drives business growth, and the kind of people that our clients genuinely want to be...

Every September, the hunger-fighting community joins Feeding America in their annual nationwide campaign, Hunger Action Month. The goal? To inspire people to take real action in their communities and raise awareness about hunger in the United States–an issue that is...