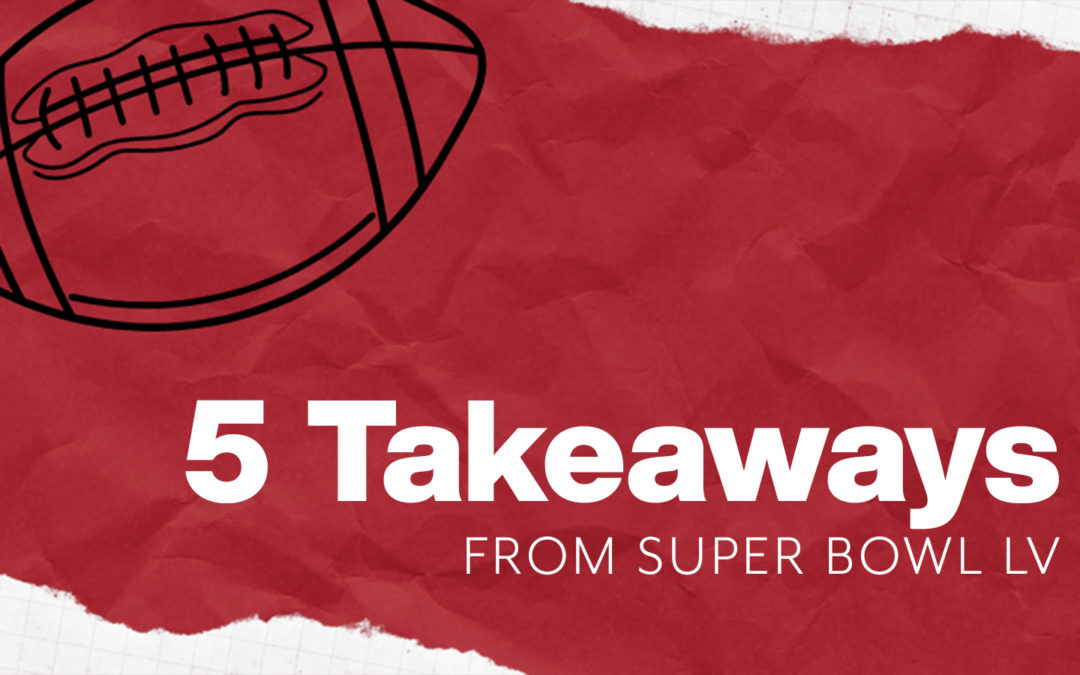 First, let’s get the football talk about of the way. The NFL season has been weird but there is one constant that remains in the league. Love him or hate him, Tom Brady knows how to show up and win football games. The game was a snooze fest, but no one seems to ever care about the outcome of the game itself. It’s the advertising, social media trends and performances that become the water cooler – er, we mean Zoom – chatter for days and weeks to come.

Coming off a year in which public scrutiny of brands and companies was at an all-time high, we have to take a moment to commend the NFL on their efforts to address so much during one event. From the cardboard cutouts program for Feeding Tampa Bay, to honoring Front Line workers and appropriately lifting up equality, the big game provided all of us with moments of big feels. And of course, we all enjoyed some laughs throughout the evening. Will Ferrell never disappoints!

After taking in all of the commercials, seeing the social conversations and follow up analyses, here are our 5 big takeaways from a marketing and PR perspective:

5 – For the most part, brands did a good job of understanding today’s world and the moment we are in as a country. Some major brands decided to just sit out of traditional TV advertising. Some brands took a more serious approach with underlying themes of unity or lifting up frontline workers or those who experienced hardship, as we saw in the powerful Indeed commercial. Many brands turned to nostalgia, and some stayed true to their humorous ways but in a way that showed empathy, like Bud Light’s raining lemons. Generally, the tone of commercials was much safer this year as brands played into American culture, empathy and unity.

4 – Reddit proved you don’t need a fancy, expensive ad to be impactful in today’s world. In fact, a 5- second ad developed in 2 days, placed regionally, is all you need if you have something compelling to say.

Other brands who normally spend big bucks on TV time, took to social media instead, and still won. Budweiser, who donated a portion of their ad dollars COVID efforts, killed it with their #EyesOnTheClydes Twitter campaign that brought back the nostalgic commercials we love while offering fans a chance to win a retro fridge stocked with beer.

The only thing that satisfies as much as a cold Bud? Clydesdale nostalgia. Reply with #EyesOnTheClydes and #Sweepstakes for a chance to WIN A RETRO FRIDGE STOCKED WITH BUD before the next commercial break. #SuperBowl pic.twitter.com/ttMDasqYuE

3 – The meme takeover is here! For the last several years advertisers have been picking up on viral memes and using them to their advantage to reach audiences. Companies that inadvertently find themselves the subject of a viral meme have to decide whether it’s in their best interest to interact with the attention, and one of our favorite examples has to be Jake from State Farm. The original, viral commercial has taken on a whole new life since it became a meme and State Farm recast Jake as someone younger and relatable for a more diverse, also younger audience. The celebrity-studded Super Bowl State Farm commercial created its own meme based on the original, with Drake from State Farm as Jake’s body double. Funny commercials and celebrity endorsement are nothing new, but the consistent use of memes by advertisers is only increasing and it’s clear that in order to stay relevant, companies need to learn to pay attention and play along when the opportunity arises.

2 – Brands continue to have an opportunity to create new marketing efforts by watching and engaging fans in real time. Prime example – Gatorade. This year the TV feed cut away before the anticipated Gatorade dunk. Gatorade chimed in on social media to help fans that were eagerly awaiting to see if they won the prop bet by guessing the correct Gatorade color that was to be poured over Coach Arians. And, Gatorade took it a step further with fan polling. Will we see a Gatorade cam next year?

1 – Unity is a clear message of 2021. Our big takeaway is that brands large and small are listening, and playing into America’s need for comfort, for nostalgia, and for a coming together after a tumultuous 2020. And that is something we can all cheer for.