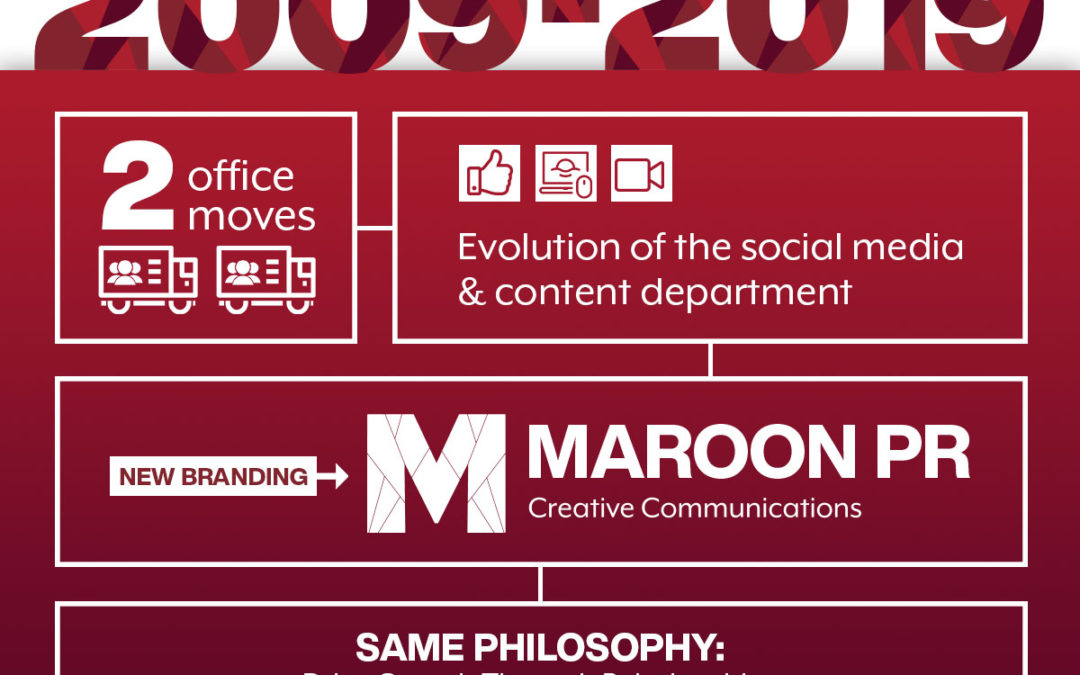 The 2010’s – a decade defined by the rise of social media and technology to support it. A decade that started with the launch of Instagram and was filled with social movements like Giving Tuesday, the Ice Bucket Challenge and #MeToo. The terms selfie, go viral, instagramable moments and social giving became a part our everyday vocabulary. Technology used by companies like Amazon, Uber and Apple redefined how we live, giving us access to everything we need with a click of a button. As the decade comes to a close, we reflect back on how public relations has evolved, reinvented itself even, through lessons we’ve learned.

10. Social media is not a fad. Facebook, Twitter, Spotify, and Snap each went public after Jan. 1, 2010, and all have market valuations of $20 billion or more. Social has changed how businesses can reach the target audiences and connect with consumers.

9. The newsroom is NOT dying. In the early 2010’s we recall the public relations industry being very concerned about the death of the newspaper but we never really viewed it that way. We knew people were still going to get their news somewhere and news agencies had to adapt to digital. Even though actual newsrooms have shrunk, the news itself continues to grow

8. Accept that social media breaks news. Social media changed the game for press announcements and as PR people, we had to accept and adjust. We’re now beyond even a 24-hour news cycle and there are more ways than ever for information to be released. Every time someone refreshes Twitter, there’s an endless supply of information. Anything and everything can be seen as a news story waiting to happen.

7. The press release is still relevant. And because social media has changed the game, the core meaning of a press release has changed. We’ve learned that press releases are still needed, but we’re using them in a different way. The release is great for ensuring accuracy and can help with SEO when published, but is not effective in and of itself. Effective pitching, relationships and persistence are keys to coverage.

6. PR isn’t just telling stories, it’s creating stories. This decade saw the rise of content. Owned content, as we call it. Businesses can, and should, tell their own stories through their own channels. In the last few years our services have expanded to develop owned content for clients. Our creative team consists of a graphic designer, videographer and content manager.

5. “Media” is no longer just news gathering agencies. With the growth of “owned” media, anyone can be a creator and develop their own following. We’ve seen the rise of bloggers and influencers becoming their own media outlets and have navigated how to best work with these individuals to amplify reach.

4. The written word has its place… Writing is still a very important part of a PR professional’s job but we now have to write in many different styles – for pitching, blogs, social media, messaging and more!

3.…but video is king. Our agency was a very early adopter of bringing video in-house.  As we continued to get more and more calls from clients asking for a videographer referral, we decided to take the leap and bring the service inhouse. About a month after we make this move, we saw a big announcement from Ketchum to bring video content creation in-house. If one of the world’s largest PR agencies was taking this step, we knew we were right in our decision. Today, video content is one of the fastest growing sectors of our business.

2. Adapt, and adapt again. From the words of Ferris Bueller – “life moves pretty fast. If you don’t stop and look around once in a while, you could miss it.” Our industry is moving faster than ever, and we’ve learned that we have to adapt in order to be successful. We continue to restructure our teams, rethink our strategies and investigate new media so we can do our best to stay ahead of the curve to help businesses grow.

1. It’s all about relationships. This last decade has shown us how much life has changed, from how we ingest news and distribute content to how interact with each other. But at the end of the day, relationships are what matter most when it comes to public relations. Our mantra has been the same since day one – Drive Growth Through Relationships. And we intend to keep it that way through this next decade.